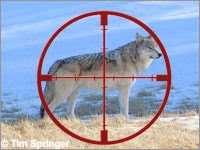 "We reached the old wolf in time to watch a fierce green fire dying in her eyes. I realized then and have known ever since that there was something new to me in those eyes, something known only to her and to the mountain. I was young then and full of trigger-itch; I thought that because fewer wolves meant more deer, that no wolves would mean hunters’ paradise. But after seeing the green fire die, I sensed that neither the wolf nor the mountain agreed with such a view.” -- Aldo Leopold, 1949

“We Americans, in most states at least, have not yet experienced a bear-less, eagle-less, cat- less, wolf-less woods. Germany strove for maximum yields of both timber and game and got neither.”  -- Aldo Leopold, 1935

"A thing is right when it tends to preserve the integrity, stability, and beauty of the biotic community. It is wrong when it tends otherwise." -- Aldo Leopold, 1949

2014: Idaho Fish and Game recently hired a bounty hunter to try and eliminate two packs of wolves in the Frank Church River of No Return Wilderness, one of the largest wilderness areas in the United States. Idaho hunters have organized wolf-killing competitions and killer co-ops to pay trappers to kill wolves. The state legislature and governor declared wolves a "disaster emergency" and have allocated $2 million to killing wolves. More recently the department conducted secretive aerial shootings of wolves from helicopters with no public knowledge or input and spent $30,000 to kill 23 wolves. Idaho Fish and Game is doing this and more in an ongoing effort to appease many ranchers and hunters to protect livestock and maintain artificially high and unhealthy numbers of elk for hunters to shoot at.


One of the cornerstones of our "North American Model of Wildlife Conservation" -- which hunters and hunting-based organizations love to tout and claim to support -- is that wildlife, all wildlife, be managed based on good, sound science.  That good, sound science shows that the return of wolves to much of the western United States has resulted in significant overall, long-term benefits to wildlife and the habitat that sustains them -- including the species we love to hunt.

Elk populations are increasing in most of the West. In Idaho, the fish and game department is expanding elk hunting to reduce elk populations while simultaneously killing wolves under the guise of protecting and boosting elk numbers. Where elk populations do appear on the decline there are plenty of factors to consider in addition to wolves: Changes in habitat; the previous existence of artificially high elk populations at levels beyond the viable carrying capacity of the land; lack of mature bulls and low bull-to-cow ratios in herds (often resulting from early season hunting and too much hunting pressure on bull elk) which influences the timing of the rut and breeding behavior, the timing of spring calving, and often results in increased vulnerability of elk calves to predation; influence of other predators including mountain lions, black bears and grizzlies; unanticipated impacts of various hunting regulations and hunting pressure, and changes in behavior and habitat use by elk in the presence of wolves. And more.

Where I hunt, the growing presence of wolves has changed the behavior and habits of elk. Elk bunch up more for safety, and move around more to evade and avoid wolves. They are a lot more wary. I have adapted and adjusted to these changes and have no problem finding elk.This is part of the beauty and value of hunting within wilderness -- to adjust, adapt and be part of the landscape; to be, as my friend David Petersen put its, part of the "bedrock workings of nature."  We render the wilds a diminished abstract when we alter it to suit our own needs and desires and, in the process, make it less healthy and whole. There are those who espouse the virtues of backcountry hunting and yet seem apathetic or supportive towards the destruction of backcountry integrity. Those who understand the wilds know how critically important predators are to the health of the land; to remain silent about the nonscientific, politically-based killing of wolves in the wildest of places is to be complacent towards the degradation of what we claim to cherish.

Yet hunters, in general, hate and blame wolves for pretty near anything and everything including their own lack of skill, knowledge and effort in hunting elk. Science is shunned and ignored. David Allen, the executive director of the Rocky Mountain Elk Foundation,  a national hunter-based conservation organization, claims wolves are "decimating" elk herds and calls wolves the "worst ecological disaster since the decimation of bison" despite research funded by the organization that shows otherwise. Most of what many hunters claim to know and understand about wolves and wolf and elk interactions is based on myths, lies and half-truths; they rapidly and angrily dismiss logic, facts and science as coming from "anti-hunters," "wolf-lovers" and "tree-huggers" from "back East." Most hunter-based conservation organizations and state agencies avoid the topic for fear of being pegged "one of them." Many actually help perpetuate the lies and half-truths to boost and maintain membership. Some try to come across as reasonable by stating that they think wolves should be managed just like other wildlife, such as elk.

But wolves are not elk; being a top predator they have altogether different, and self-regulating, reproductive and survival behaviors and strategies. "Other" wildlife, such as elk,  are managed based on science -- based on what we know about behavior, ecology, breeding behavior, habitat use and selection and other factors. Wolves are being managed purely based on politics driven by ignorance and hate.  Many hunters and others in Montana, Wyoming and Idaho long advocated for the delisting of wolves from the Endangered Species Act and turning management over to the states. It happened. And now these states -- particularly Idaho -- are doing what they can to kill as many wolves as possible, science be damned.

Idaho is proving over and over that their state cannot handle the scientific, sustainable management of wolves. No public agency should have the power to decide such things as Idaho Fish and Game is doing with so little public accountability and oversight. They are acting on behalf of a small, but politically-influential segment of our population based on pure politics, lies, myths, misconceptions and half truths about wolves and ignoring what we do know about wolf biology, ecology, behavior and interactions with and impacts to elk.

As an avid and passionate hunter in Montana (who has killed and eaten 26 elk over the years) I am absolutely disgusted that no hunter-based conservation organization -- most of which claim to support and defend sound, science-based management of wildlife -- are speaking out against this slaughter which is a clear violation of the North American model of wildlife management these organizations claim to uphold. At best, many hunters and hunting-based organizations are remaining silent for fear of being ostracized; at worst, most hunters and hunting organizations are supporting this. More and more I feel like an anti-hunter who hunts. It's embarrassing, appalling and outrageous.

Even groups I support and respect, including Backcountry Hunters & Anglers, the Theodore Roosevelt Conservation Partnership and National Wildlife Federation are ignoring and avoiding this clear violation of science-based wildlife management and our North American Model of Wildlife Conservation they claim to uphold and defend -- I can only assume as to not upset their membership base.

As Aldo Leopold so aptly put it more than 50 years ago: "The sportsman has no leaders to tell him what is wrong. The sporting press no longer represents sport; it has turned billboard for the gadgeteer. Wildlife administrators are too busy producing something to shoot at to worry much about the cultural value of the shooting."

I am growing increasingly disgusted and angry towards my so-called fellow hunters, and most hunter-based organization, for continually talking "Aldo Leopold" and the "North American Model" out of one side of their mouths while ignoring or even supporting this sort of political, nonscientific "management" of a critical keystone, umbrella wildlife species that plays a critical role in shaping, maintaining and influencing healthy wildlife and wildlife habitat for all species -- including the species we love to hunt and the habitat that sustains them.

This is one of the flaws of our current and mostly good system of wildlife management in which states generally have full authority over managing their wildlife. State fish and game departments, such as Idaho Fish and Game, are overseen and controlled by state politicians and game commissioners (who are often ranchers and hunters) appointed by politicians -- and the hunting and ranching industries have more influence over state decisions than others. Aldo Leopold, widely considered the "father" of modern wildlife management, warned against such things more than 50 years ago.

A recent report about the flaws of the North American Model summed it up this way: "The scientists also express concern that the interests of recreational hunters sometimes conflict with conservation principles. For example, they say, wildlife management conducted in the interest of hunters can lead to an overabundance of animals that people like to hunt, such as deer, and the extermination of predators that also provide a vital balance to the ecosystem."

It needs to change.

More than half a century ago Leopold wrote: "I personally believed, at least in 1914 when predator control began, that there could not be too much horned game, and that the extirpation of predators was a reasonable price to pay for better big game hunting. Some of us have learned since the tragic error of such a view, and acknowledged our mistake."

We still haven't caught up to Leopold.

If we hunters truly believe in sound, science-based wildlife management, the North American Model of Wildlife Conservation, and the ideas and principles preached and promoted by the likes of Aldo Leopold, then it is time to speak up.
Posted by David Stalling at 11:47 PM