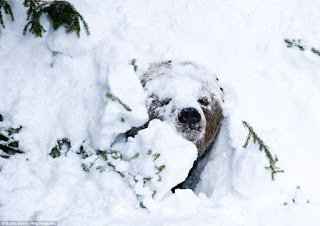 On a cloudy, chilly day last week I went ice fishing for nonnative rainbow and brook trout on an artificial, human-made lake created by the construction of a dam in 1885, impounding the once-natural flow of the North Fork of Flint Creek to provide power for the nearby town of Phillipsburg in southwest Montana. Georgetown Lake is considered a "Blue Ribbon" fisheries, where recreational anglers like me can pursue nonnative trophy-sized fish. Anglers can keep five nonnative trout a day, of which only one can be a nonnative brook trout (indigenous to the East Coast of the United States, but not Montana), and it must more than 16" in length. Most of the lake is closed to fishing during the months of April, May and June to protect nonnative fish while they’re spawning. These regulations are put in place and enforced by the Montana Department of Fish, Wildlife & Parks, overseen by a governor-appointed commission made up of mostly hunters and ranchers, funded mostly by hunting and fishing license fees to protect and enhance opportunities for people, like me, to catch nonnative trophy-sized fish.

From where I was fishing, I could look south into the rugged, snow-capped peaks of the Anaconda Pintler Wilderness, administered by the U.S. Forest Service, where I have spent much of my life hiking, backpacking, snowshoeing and hunting for wild, native elk. I thought about a special night back in September, in a remote part of that wonderful wilderness, when I slept out under bright stars and a brilliant full moon listening to the beautiful wild howls of native wolves.

As I was ice fishing on that human-created lake catching nonnative trophy rainbow trout (and releasing a small nonnative brook trout so it could maybe grow into a nonnative trophy fish) a war on native wolves was underway throughout Montana.

New wolf-killing regulations in Montana allow individuals to kill up to 20 native wolves (10 by trapping, 10 by shooting). Snaring, baiting and shooting of native wolves are all legal. Night hunting for native wolves is allowed on private lands. A recent court-ruling declared aerial shooting of native wolves is permitted. These regulations are put in place and enforced by the Montana Department of Fish, Wildlife & Parks, overseen by a governor-appointed commission made up of mostly hunters and ranchers, funded mostly by hunting and fishing license fees, based on false claims of protecting wild elk and livestock.

So while the state of Montana is working to enhance some nonnative species, it is simultaneously carrying out a war against other native species. This sums up the flaws to our current system of wildlife management, and why it must change.

Thus far, about 250 wolves have been killed in Montana this year, more than 20 right outside the boundaries of Yellowstone National Park – a boundary wolves aren’t aware of when they cross from the Park (where they’re protected) into Montana (where they’re slaughtered). Yellowstone has thus far lost nearly a quarter of its wolves, including one entire pack. Many of those wolves wore tracking collars as part of ongoing research to better understand wolves. The governor of Montana himself, Greg Gianforte – the same man who was arrested for assault after body-slamming a reporter because the reporter asked him questions – was found in violation of state regulations when he recently trapped and killed a wolf near Yellowstone. He also killed a radio-collared mountain lion after it was treed by dogs. The lion was also part of an ongoing research effort to better understand predators.

Here’s a few things we understand for certain about predators such as wolves, grizzlies, mountain lions and coyotes: They didn’t evolve with much predation; they are mostly self-regulating in maintaining population sizes; they have intricate social structures, breeding behavior and territorial tendencies. When certain individual predators are killed from a population, it can disrupt and alter social structures, breeding behaviors and territorial tendencies, and result in more breeding and more predators, many who don’t learn skills and survival tips from older animals now dead – skills and survival tips such as how to hunt elk and deer, how to avoid humans, how to avoid livestock. The killing of these predators often exacerbates the challenges managers claim to be solving. Where predators are heavily hunted, livestock depredation and conflicts with humans often increases.

But science doesn’t seem to matter. A lot of people in Montana don’t want to understand native predators. They don’t even try to understand how to coexist with native predators. They just want to kill them. They even organize and hold killing contests with prizes for those who can slaughter the most wolves and coyotes. These are the people who influence and control the management of wolves and coyotes, management based on lies, myths, misconceptions, politics and fear.

Grizzly bears are next.

Grizzlies are currently emerging from their winter dens, awaking to an increasingly hostile world of challenges, threats and dangers from humans who, for the most part, misunderstand and fear grizzlies. Idaho serves as an example.

About 35-40 grizzly bears live in the Selkirk Mountains of Idaho. Another 30-40 occupy the Cabinet-Yaak Ecosystem along the Idaho and Montana border, a small, isolated population threatened by proposed road construction and logging. In other words: There’s maybe, at most, 80 grizzlies, but more likely about 50 grizzlies, in the entire state of Idaho. Yet Idaho Governor Brad Little just submitted a petition to the U.S. Fish and Wildlife Service to remove grizzly bears in the “Lower 48” of the United States from the Endangered Species list, and recognize states’ “successful efforts to recover and manage” grizzly populations.“Bureaucratic gridlock is keeping healthy grizzly populations on the threatened species list unnecessarily,” Little says.

Yes, the predator-hating Governor of the same predator-hating state that sends bounty hunters into wilderness areas to eradicate entire wolf packs (on federal public lands!); that guns down wolves from helicopters; that pays people a bounty to kill wolves; that allows people to trap, poison and shoot as many wolves as they want whenever they want, is now telling us they can be trusted to manage and protect grizzly bears?

The governors of Montana and Wyoming are also pushing for delisting of grizzlies (to remove grizzlies from federal protection and turn management over to the states) while simultaneously carrying out a war against wolves. All three states have plans to hunt, to kill!, grizzlies for fun, amusement and entertainment, despite the fact that the hunting of apex predators, that didn’t evolve with much predation, has numerous, negative consequences to those populations, not to mention the individuals hunted and killed.

Grizzlies occupy less than two-percent of their historic range. They mostly exist in several, relatively small, isolated populations with no genetic connectivity. They face numerous challenges from climate-related changes to their habitat and related declines in traditional food sources, causing them to expand their range in search of alternative foods, putting them more in contact and conflict with a rapidly increasing human population.

State wildlife management in Idaho, Montana and Wyoming, as in many states, is funded mostly through the sale of hunting and fishing licenses, and excise taxes in hunting and fishing equipment. Management is guided by commissions appointed by governors, and consist mostly of people from the hunting and agricultural community. As a result, management is mostly directed at appeasing hunters and agricultural interests, favoring hunted species such as elk and deer, to the detriment of other species, particularly predators, such as wolves, grizzlies and mountain lions. The so-called “management” of these predators by states is based on fear, lies, myths and misconceptions, certainly not science. Many hunting organizations, the hunting media and the hunting equipment industry perpetuate the lies, myths and misconceptions and influence and control state wildlife management.

We hunters like to tout the North American Model of Wildlife Management as a great success story in restoring and protecting wildlife. The revered seven “tenants” of that system include: Wildlife resources are conserved and held in trust for all citizens; Commerce in dead wildlife is eliminated; Wildlife is allocated according to democratic rule of law; Wildlife may only be killed for a legitimate, non-frivolous purpose; and, Scientific management is the proper means for wildlife conservation. And yet there is commerce for the hides, fur, antlers and horns of native wildlife; hunters have far more influence and duscontrol over state wildlife management than other citizens; wildlife is often killed for nonlegitimate, frivolous purposes, including amusement, entertainment and profit; and, science is not driving the management of predators – in fact, science is being dismissed and ignored, resulting in wildlife management that is out of alignment with modern ecological understanding, public attitudes, public trust principles and norms of democratic governance. It needs reform.

What You Can You:

* Support the efforts of Wildlifefor All, an emerging effort to address the systemic problems of state wildlife management in a coordinated and strategic way on a national scale -- an initiative that is urgently needed, long overdue, and critically important for the future of wildlife.

* Sign the petition to permanently protect grizzlies, and stop the killing and harassment of "explorer" bears.

* Visit the GrizzlyTimes and All Grizzly, by renowned carnivore scientist Dr. David Mattson and wildlife advocate Louis Wilcox, to learn all you can about grizzly bears and the nonscientific, political, fear-based mis-management of grizzlies and other wildlife.

* Support national and local organizations such as: Wolvesof the Rockies, WildEarth Guardians, CenterFor Wildlife Diversity, SierraClub, EarthJustice, WesternWatersheds Project, the Flathead-Lolo-BitterrootCitizen Task Force and Friends of the Bitterroot, all working to -- among other things -- protect the Endangered Species Act, protect wolves and grizzlies and stop the war on native predators.

Posted by David Stalling at 7:53 PM