“There is something innate to human nature, something basic to our civilized sensibility that recognizes certain distinctions of worth in reality. And the name we have traditionally given to the highest of these is ‘the holy’ or ‘the sacred.’”  -- Patrick O’Neill

It’s difficult to know what’s sacred nowadays.  Money seems to top the list. I suppose one person’s “sacred” place is another’s gas and oil field.  Apparently, for some folks, a gas and oil field is sacred.

Why else would anyone consider drilling for gas and oil around Chief Mountain in northwest Montana along the border of Glacier National Park and the Blackfeet Nation. The Chief is a prominent peak along the Rocky Mountain Front, a rugged 200-mile overthrust wall of steep, reef-like mountains rising from the Great Plains.  Elk, bighorns, pronghorn, badgers, wolverines, lynx, mountain lions, wolves and an abundance and diversity of other wildlife thrive on this land. Clear, clean rivers sustain some of the last remaining healthy populations of Westslope cutthroat trout. Grizzlies still wander out onto the plains like they did when Lewis and Clark came through. The U.S. Fish and Wildlife Service declared it the “top one percent” of wildlife habitat remaining in the Continental U.S.

If anything remains sacred, this is the place.

Seven years ago while working for Trout Unlimited I assisted a coalition of local hunters, anglers, ranchers, outfitters, businessmen and tribal leaders in a successful effort to protect a significant chunk of the Rocky Mountain front from gas and oil development, mostly around the Badger Two Medicine area south of Chief Mountain.

Working as a professional conservationist I had to be cautious about using emotional arguments, about calling a place “sacred,” but instead focus on the importance of hunting, fishing, clean water and wildlife to the economy.  Being sacred is no longer enough to save a place; It has to be one form of human commodity or another. But when a local man from Choteau named Stoney Burke was accused of being “emotional” about Montana’s Rocky Mountain Front he pounded his fist on a table and shouted, “You’re goddamn right I’m emotional – if you can’t be emotional about a place like this then what the hell can you be emotional about?”  He compared putting roads and gas wells along the Front to permanently scarring his daughter’s face. When someone mentioned that Forest Service lands are managed for multiple use, and so gas and oil development should be allowed, Stoney said, “Multiple use doesn’t mean you take a crap in your kitchen.” 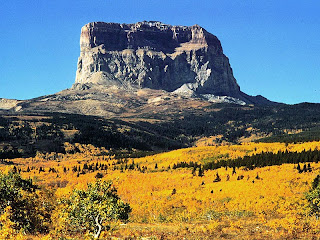 If only everyone were as passionate and emotional about sacred places.

While working along the Front, I became acquainted with Chief Earl Old Person, Chief of the Blackfeet Nation. One time, while eating breakfast together at the Two Medicine Cafe in East Glacier, I shared with the Chief some personal struggles. He suggested two remedies; Medicine Grizzly Lake and Chief Mountain. “Go there,” he said. “You’ll feel better.”
The mountain has been sacred to the Blackfeet for hundreds of years and remains sacred to many First Nation people throughout North America who travel to the mountain for sweet grass ceremonies, placing prayer flags and other religious rites. In the early 1900s as white settlers came through they observed native burial sites along the base of the Chief.

We hear the term and pass it along.  We portray and pretend modern-day Native Americans have mythical and mystical connections to land as if it were genetic. Some of them do. Others, like most of us, will sacrifice the sacred for money to buy homes, cars, televisions, gas, heat and food on the table. This is why the Bureau of Indian Affairs recently leased a large swath of land aroundChief Mountain for gas and oil development with the blessing of some tribal leaders and members eager for profit. Others are angered, sickened and saddened. The Blackfeet are as divided as the rest of us on such things. 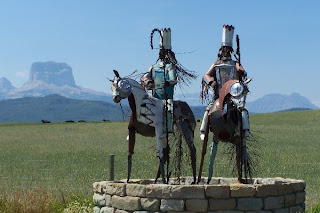 I envy and can only imagine the bond native people once had to the land and wildlife. They understood they were part of it. In a small way, I think I can relate: Through a lifetime of hunting, fishing and roaming remote and wild places, for as long as 10-weeks at a time, I've developed my own intimate connection to wildlife and wild places.  People close to the land often find reverence for it.  The sacred is what sustains us. This may be why many people today regard gas and oil as more sacred than wild places--or at least worth sacrificing the sacred for.  Our society is so divorced from our planet we forget that clean air, clean water and wild places still sustain us all.  That's why we crap in our kitchen.

Elders from Southern Alberta’s Siksia Band pass on this tale: Near the end of days a Great White God will appear from the top of Chief Mountain and upon his departure the mountain will crumble and be destroyed.

Perhaps that Great White God is dangerously addicted to gas and oil and willing to alienate the sacred.

Note: Leases don’t always result in drilling but it’s a step in that direction. In 2006 Questar Corporation donated leases to Trout Unlimited ensuring that no gas and wells would go in. If you'd like to help stop development near Chief Mountain please sign this petition now. To learn more, click here: Save the Sacred Chief. 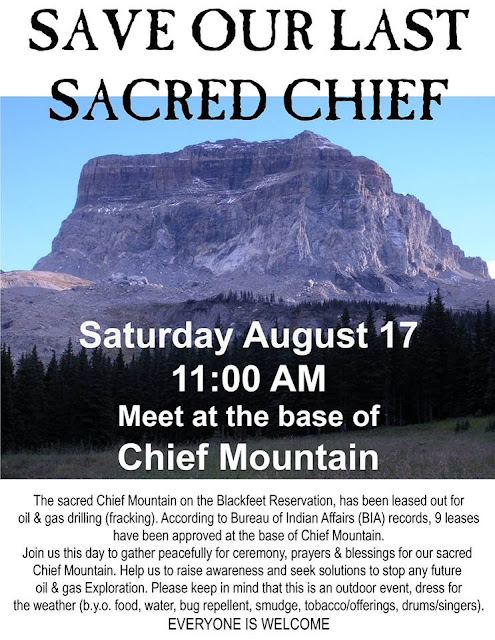 Posted by David Stalling at 1:13 PM