Of Concrete, Steelheads and Swallows: Bringing Back a Southern California Native

On the morning of April 17, 2012, while walking on a bike path along San Juan Creek, not far from where the creek empties into the Pacific at Doheny State Beach in Dana Point, California, a man named Brad Rening found a large, dead fish and showed it to a state park supervisor, who called  a long-time Trout Unlimited (TU) leader George Sutherland. George brought the fish to the California Department of Fish and Game, which turned the fish over to the National Oceanic and Atmospheric Administration (NOAA).  Why such a big deal over one dead fish? As you likely guessed by now, it was a southern coastal steelhead, one of the rarest of California’s eleven species of native salmonids.

About 55,000 adult southern steelhead once annually returned to rivers and streams all along the southern California coast, and anglers were catching plenty of nice fish right up into the late 1940s.  But development, migratory barriers, water diversions, pollution and agriculture took its toll, and now the estimated number of southern steelhead is down to a few hundred.  More than half of the watersheds that historically sustained southern steelhead are now devoid of the fish, according to NOAA, and all of the watersheds in the northern part of the southern Steelhead’s range (Santa Maria, Sanat Ynez, Ventura, and Santa Clara Rivers) have experienced declines of 90 percent or more. In the southern range, from Malibu to the Mexican border, steelhead have only been documented in three watersheds since the species was listed as endangered in 1997.

Despite the long history of freshwater angling in this region, this catastrophic decline generated hardly a murmur of protest amidst the bustling beach culture of southern California. But southern steelhead are survivors, having adapted to seasonally dry streams in the arid climate that exists in the extreme southern end of the steelhead’s range. In 2002, NOAA’s National Marine Fisheries Service (NMFS) extended the southern steelhead's endangered status from Malibu to the Mexican border after 40 steelhead were seen in San Mateo Creek in Orange County. A year later, state biologists spotted more steelhead in Trabuco Creek in Orange County.  In 2009, a hefty 37” steelhead was found in San Juan Creek.

These are not the picturesque creeks portrayed in flyfishing magazines and calendars – these are creeks surrounded by large cities, highways, concrete and rebar that often serve as dumping grounds for shopping carts, old bikes, tires and refrigerators. “Their habitat is so compromised, particularly from drought and so many concrete barriers blocking their historic migratory passages,” says Drew Irby, Chairman of TU’s California Council. “Yet they still come back despite all odds. All they need is a bit of help.”

TU’s South Coast chapter is working to increase awareness of the southern steelhead and build grassroots support to improve habitat, remove barriers, create fish passages and open up creeks where fish used to spawn. In Trabuco Creek in San Juan Capistrano, for example, fish migrating from the ocean upstream can currently go only as far as a large pool at the bottom of a concrete culvert. If passages were reopened, steelhead would have access to 13 miles of high-quality spawning habitat that reaches into public lands (the Cleveland National Forest) in the Santa Ana Mountains. 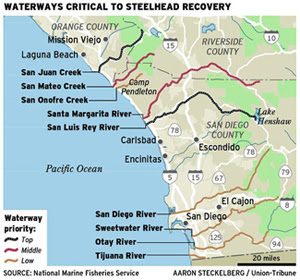 Last January, the NMFS completed a plan for returning steelhead to several counties, including San Diego, Riverside and Orange Counties. “The plan provides an overall road map to recovery,” says Mark Capelli, the steelhead recovery coordinator for NMFS. “We’re not trying to restore prehistoric conditions, but we do need to get these runs built up to the point where they are not going to go extinct.”

Every spring the city of San Juan Capistrano holds a week-long festival to celebrate the annual return of American cliff swallows, a migratory bird that makes a 6,000 mile journey to Argentina and back every year.  I hope someday we will also be celebrating the annual return of southern steelhead from the Pacific to their spawning grounds. Like the famed Capistrano Swallows, southern steelhead are a unique part of our natural heritage and a symbol of clean water, civic pride and a healthy environment.


Note: This was published May 12, 2012 on Trout Unlimited's national blog.
Posted by David Stalling at 1:33 PM