It's That Jaeger Time of Year 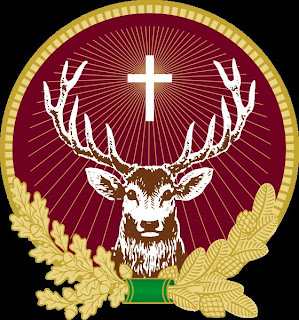 It’s about 2 am after one too many shots of Jagermeister and I am peddling my cruiser bike home on a dark night along an empty Missoula street. Periodic street lights guide my way among a hodgepodge of shadows cast by Norway maples planted long ago between sidewalk and houses.  Then there, in front of me, smack dab in the middle of Park Street, stands a deer.

It’s not unusual for whitetails to wander this part of Zootown, being as close as it is to Pattee Canyon and South Hills – a quiet neighborhood scattered throughout with lush, nutritious lawns, city parks and schoolyards inundated by fattening, assumingly delicious domestic grasses, shrubs and forbs. But this was a rare, large, handsome buck with an intimidating rack of antlers, fully polished, with chest puffed in a proud pose reminiscent of Bambi’s dad.  It was like a scene from Northern Exposure.

So I stopped and gawked at him gawking at me. In my goofy state of mind I couldn’t help but narcissistically hope he was equally impressed. He was obviously confused.

He seemed rather rutty -- which is no surprise considering the chilly autumn evenings we’ve been having.

When I was a Marine training in the Black Forest of Germany I met a seasoned Jaegermeister who told me about the vision of Saint Hubertus, the Patron Saint of Hunters, (an image now the label on fruity, bitter green bottles of liquor) who, on a Good Friday around 680 A.D., while skipping out on church to hunt the forested Ardennes, came upon a white, ghost-like stag with a Christian crucifix appearing between its antlers. Perhaps the good Saint was a bit tipsy. Since long before it became more associated with late night bombs the symbol has traditionally been pinned upon the hats of German Jaegers to bring good luck.
I sensed no predatory desire to make winter meat of this particular animal on this particular night on Park Street. But somewhere mixed among surprise and awe emerged a slight, primeval yearning of anticipation for the approaching predatory season.  There’s already a hint of cool yellow on aspens and larches in the high country.

Yup: It’s that time of year in Montana and I am, if nothing else, a hunter.

The Jagermeister label contains a verse written in German from the poem Weidmannsheil by a forester, hunter and ornithologist named Oskar von Riesenthal (1830-1898) that translates:

It is the hunter's honour that he
Protects and preserves his game,
Hunts sportsmanlike, honours the
Creator in His creatures
Posted by David Stalling at 9:03 AM