In Defense of Wilderness: "The Only Thing Left Worth Saving" 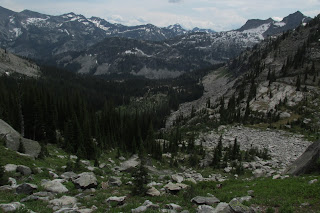 "In matters of style, swim with the current; in matters of principle, stand like a rock." --Thomas Jefferson

Several friends refer to my wilderness ideals as "elitist" and "purist." One of them thinks mountain bikes should be allowed in wilderness, therefore boosting the number of people who might support wilderness. Another says my stubborn opposition to "seemingly benign actions" such as letting mountain climbers leave permanent anchors within wilderness turns too many people against the very concept of wilderness—hence, they’re not likely to support the creation of new wilderness. Yet another friend tells me that focusing on "trivial issues" such as keeping helicopter landing pads and permanent structures out of wilderness is a waste of valuable time and effort which would be better spent on "more important" battles. Compromise a little, they say, and we’ll have more people, more clout, more money.

But will we still have wilderness?

Some of it, of course, we’ve brought upon ourselves. We environmentalists love to jump on the Chamber-of Commerce bandwagon and tout the recreational and economic values of wilderness and wildlands. People will come. They’ll spend money. They’ll buy lots of gear. It’s good for the economy. We partner with the boot and tent makers and help promote maps, trail guides, freeze-dried bananas and light-weight cappuccino makers. Subaru tells us that those who "get it" drive quietly to the trailhead in an Outback, and you can always hire a guide to make your trip easier and more convenient. Somewhere in the mire of raising funds, building partnerships and drumming up support, we lose sight of the object; we either forget, or choose to ignore, that wilderness is not just for people.

The very concept of wilderness designation derived from concern that most all other public lands were managed under Gifford Pinchot’s doctrine of the "greatest good for the greatest number of people." This is precisely what makes the Wilderness Act so remarkable: for an historical moment, we Americans humbly cast aside the utilitarian notion that all things exist for us. In a relatively few, small places, we actually decided that some land ought to retain its primeval character and influence, without permanent improvements or human habitation, to be protected and managed so as to preserve its natural conditions. As Gary Snyder puts it in The Practice of the Wild:

"These are the shrines saved from all the land that was once known and lived on by the original people, the little bits left as they were, the last little places where intrinsic nature totally wails, blooms, nests, glints away."

And it only makes up about four percent of the land of the continental United States. Is that really too much to ask?

Apparently, it’s a tough concept for some to grasp. Why else would the Forest Service propose to construct 129 Helicopter landing sites in Alaska wilderness to allow "people with limited time or physical ability easy access to some extremely remote Wilderness settings," to make it possible "for a greater number of visitors to easily enjoy more remote wilderness locations." The greatest good for the greatest number.

Wilderness management should more aptly be called people management, with the general idea of restricting people’s actions so as to reduce impacts and keep wilderness wild. There are already trails, signs, campsites, fire rings, lakes stocked with trout, damns, cattle grazing, structures, outfitting, use of mechanical tools, and other prevalent signs of people aplenty, either grandfathered into some wilderness or deemed necessary for social, cultural and recreational reasons. All of it diminishes wildness; we certainly don’t need more. Those responsible for wilderness stewardship could do worse than follow the advice of Michael Frome, from his book Battle for the Wilderness:

"The administrator’s responsibility should not be to outfitters and tourists, but to wilderness, free of economics and commercial considerations. The common goal of the visitor and the administrator should be to insure that future generations will know and enjoy the same degree of solitude that past generations have known and the same sense that nature, rather than humankind, prevails."

But homocentric utilitarianism is deeply ingrained in the human psyche. A business mentality prevails among federal land managers (and, increasingly so, among conservation and environmental groups) that people are customers, that their every desire and whim must be served. If opinion polls reveal that 58.6 percent of respondents want more loop trails, picnic tables, lean-tos, stocked lakes and helicopter landing pads then, by golly, that’s what they’ll get, Wilderness Act be damned. Leadership—providing people with purpose, direction and motivation, explaining to people what is right, persuading them to follow—is sadly lacking, replaced instead by policies of compromise and appeasement. Those who get in the way on matters
of principle are dismissed as extremists, purists and elitists.

I don’t accept the argument that demanding strict adherence to the Wilderness Act will erode support for wilderness. What sense does it make to gain more support for wilderness by destroying the very qualities that make a place wilderness? People supported wilderness when the Wilderness Act worked its way from grassroots conception through the halls of Congress and on to the President’s desk. I’m confident people still do. For those who don’t, we should try to gain their support by explaining what wilderness is and why it’s important—not by compromising our principles and making wilderness less wild. Wilderness is not a style that comes and goes with the seasons. Wilderness is a mater of principle. On that, we should stand like a rock.

Are there more important battles? I can’t think of any. In the words of Edward Abbey:

"I come more and more to the conclusion that wilderness, in America or anywhere else, is the only thing left that is worth saving. . . The idea of wilderness needs no defense. It only needs more defenders."
Posted by David Stalling at 10:18 AM