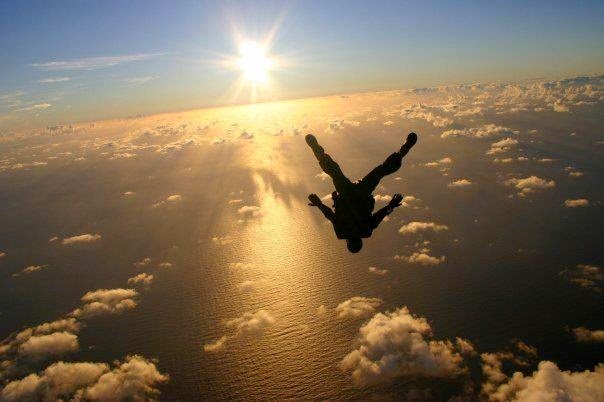 In 2003 depression, related substance abuse and thoughts of suicide led me to load my backpack, toss my wallet in the garbage, step off my front porch in Missoula, head north, and spend the next 10-weeks by myself hiking through the most remote, wild country left in the continental United States. It saved my life. Here's how it began:

“Life is either a daring adventure or nothing.”
-- Helen Keller

As a Force Recon Marine I dove out of planes from altitudes as high as 32,000 feet, night and day, sometimes with full combat gear sometimes without (sometimes right into the ocean, with SCUBA gear attached) from the swamps of coastal North Carolina to the deserts of southeast California, in the scorching heat and humidity of Puerto Rico to the brutally-frigid tundra of northern Norway -- or, as the Marine Corps hymn simply states: in every clime and place.
And I would tumble, fall, and fly. At least it feels like flying, falling at terminal velocity, speeds of 180 miles-per-hour; a slight tilt of the right hand would turn me quickly right, the left hand would turn me that direction, or I could cuff both hands inward to go forward, or outward to slow my descent. I could hunch up to slow down, or pull hands and legs in to speed up. Place hands and legs together and a missile-like nosedive results, or do flips, or spin, and so on.  By maneuvering in such a manner, a team of Marines can remain together in the sky, and even approach each other and “link up” by locking arms. I once kissed my friend Jim at 10,000-feet above the Earth.

And as the ground gets bigger and closer, I would check my altimeter on my wrist until reaching a point to “wave off” (a flagging of the hands to warn those above me that I was about to open my chute, so they could move and not crash into me), move my right hand in to the “rip cord” at my chest (making a counter move in and over my head with the left hand, so as to remain in a stable fall and not spin out of control), then pull, rapidly thrusting both hands and arms out, up and forward, like a referee’s signal for a touchdown, tightly gripping the ripcord handle that pulls out the long, thin wire that releases the nylon flaps on the pack, allowing the small spring-loaded pilot parachute to burst free, like a jack-in-the-box, catching wind and pulling the main chute out behind by a cord. The rest, if all went well, happened rapidly – the main chute blossoms open, bringing acceleration to what seems a sudden halt, with such shock at times it once literally jerked me out of my boots over northern Norway  (I got frost bit toes after landing in socks on snow in minus-40 temperatures). And then everything would seem calm, compared to the previous rushing of wind in the ears, and I would gradually steer my way down to the ground, pull down hard on toggles to flare, pause, and land sometimes softly, sometimes hard, depending on the wind, skills and luck.

At other times, the pilot chute might get caught in the wind pocket in the small of my back (a “snivel” we called it), so I would bang away with my elbow until it caught wind and deployed. Or the main might malfunction, which never happened to me, but if it did, I was trained to “cut away,” or release the main and open the reserve. (“No worries,” my instructor said, “If your main doesn’t open, you have the rest of your life to deploy your reserve.”)  It could sometimes take 1,000 feet or so for the main to open, if everything worked right, and another 1,000 or more to try and rectify things if it didn’t. For this reason, we had a general rule to open at 4,000 to 3,000 feet, and always, always before reaching 2,500 feet; an altitude that shows on the altimeter as red, danger zone – like the “low on gas” signal in a car, only with more severe consequences.

About the time I was doing lots of jumps, I had a reoccurring dream: I am freefalling, enjoying the ride, when I look at my altimeter and it’s in the red zone, 2,500 feet! I wave off, reach to pull, but I have no parachute on my back. Nothing. At first I am terrified, but quickly calm down. It’s my last 2,500 feet, I figure, I may as well enjoy it. So I smile, and begin doing front flips, and back flips, and then I wake up to the dark silence of the night.

Twenty years later I felt like I finally slammed into hard-packed earth.  My father died. My wife of 14-years filed for divorce. I could no longer focus on the work I used to love, nor any of the activities I used to enjoy. I had spent much of my life feeding secret shadows of shame, guilt, anger and fear until they finally loomed large, like the monsters I imagined in my closet as a kid. I lost all desire and passion to go on and thought, maybe sometimes it okay to quit, perhaps best to quit. I drove late one drunken night to a trailhead a few miles from my home in Missoula, Montana, to the edge of the Rattlesnake Wilderness, with a shotgun I used to hunt ducks and geese. My plan was to walk a few miles in and blow my head off. Instead, I sat in my car and cried. I thought of my son, then only three, and wondered how he would turn out. I thought of my family. I thought of my friends. I even had the twisted thought; I can hardly hit ducks with this thing. Then I thought of my dream, the last 2,500 feet.  And I thought of my maps. The maps. Maps of the wild country surrounding my home.

For years I had studied the maps, intrigued by the notion that I could walk off my front porch in town and walk all the way to Alberta through the most remote, wild country left in the continental U.S. and only cross three main (paved) roads. It was a fantasy, a journey of the mind, until that inebriated night I drove to the trailhead with a 12-guage. At that point I thought:

For years
I fed illusions
Of flying high
Until the ground grew frightenly close
Terrified, I suddenly realize
I am falling

Leaving the womb
Like leaping from a plane
Begins a tumultuous freefall
There are choices:
Remain frightened, out of control
Or get stable, and enjoy the ride
Until we meet the end
(And we will)
As sure as sky meets earth

Best to see it all now
Long before impact
While there is still time
Precious time
To enjoy an exhilarating ride
And make the most
Of the last 2,500 feet

So I will flare, flip and tumble
Through clouds and clear skies
And pretend I am flying, sometimes
Though I know better
But it still brings me joy

It’s my jump, my journey, my fall
I’ll do it as me, not to please others
Critics and skeptics be damned!
Who cares what they think?
They don’t even know
That they too
Are falling fast 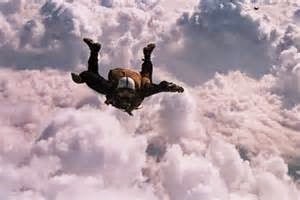 Posted by David Stalling at 11:38 AM No comments: