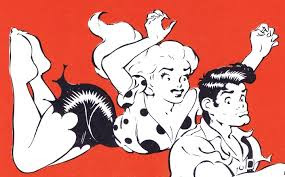 On a whim I got my haircut today at a place called The Man Shop. "Kick Ass Cuts!" they claim. "This Is Not Your Father's Barbershop!"


You can shoot a game of pool for free while waiting, or play Foosball, or shoot some hoops, or play one of the arcade games, or watch sports on one of the huge-screen TVs. I opted to kick back in one of the comfy lounge chairs while browsing through an issue of Outdoor Life full of ads for men who apparently need ATVs and military-style semi-automatic rifles to assault deer armed with large racks.

And speaking of large racks, there are a few posters of scantily-clad women with big, um . . .hooters? Jugs? Melons?

There are also assorted T-shirts for sale, most adorned with cartoon depictions of women who all looked like Daisy Mae from Lil' Abner, accompanied with words such as, "No matter how hot she is, some guy, somewhere, is sick of putting up with her shit." Another T-shirt proclaimed, "I work my ass off to feed a million people on welfare." (I assume it was referring to the small amount of taxes used to help people in need, and not the huge amount that goes towards corporate welfare for companies whose CEOs make $40 million a year but can't pay their workers enough to keep them off food stamps. But that would be a lot to put on a T-shirt, and sounds more like something a damn libtard would say, not a man! I work my ass off to feed millionaires?)

There is also a display on the wall showing the past, present and future of women. The past shows a seductive photograph of Marylin Monroe; the present shows a big-breasted woman in a Superwoman costume; the future shows an very attractive woman with a nice smile who looks . . . well, just naturally beautiful. Apparently, the future bodes well for straight men.

The young, beautiful woman who cut my hair asked me right away if I liked football. "I loved playing it," I say, "but I don't get too into watching it." When she stopped and looked at me funny and said, "What? You don't like the Broncos?" I thought, just for a second, I was going to get banned from the Man Shop. So I attempted a quick recovery and replied, "I have a lot of respect for Peyton Manning . . . he and Tom Brady are pretty amazing." To which she replied, "Tom Brady only got where he is by cheating." I changed the subject to my hair. She asked if I wanted the gray colored out. "Hell no!" I said. "I've been coloring it for years but it's time to be a man and face reality!" She liked that. "Embrace the Gray!" she said. "Be a man! Embrace the Gray!" I replied, holding my clenched fist in the air. We got along damn good after that.

I'll tell you what, I ain't lyin' . . . I did get a freaking kick ass haircut at a helluva damn good price!

There's a sign on the front door with a drawing of a handgun that reads, "Lawful Concealed Carry Welcomed on These Premises! We Support the Second Amendment, Therefore We Support and Encourage the Carrying of Concealed Weapons." 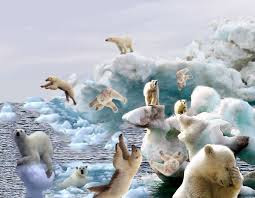 There's a new lie being spread by conservatives and those who continue to deny climate change stating that polar bear populations are on the rise. Some claim populations are "thriving" and "booming."  One meme (it's a meme, it must be true!) claims that "when Al Gore was born," there were only "7,000" polar bears left, and that today there are "30,000." (Deniers love to pick on Al Gore, as if he fabricated global warming and climate change -- and as if there didn't exist an overwhelming consensus among scientists all over the world, as well as harsh on-the-ground evidence happening around the globe.)

I wish polar bears were thriving; unfortunately, they're not.

Complicated issues are difficult -- if not impossible -- to convey in a meme. It make take a bit of time and effort, but for those interested in facts here you go:

When Al Gore was born in 1948 there were no legitimate estimates of how many polar bears existed – guesses varied widely because they were based on stories from explorers and hunters rather than scientific surveys. Before the polar bear treaty was signed in 1973, and before polar bears were listed as endangered, several populations of bears were decimated by hunting which began around 1600 and continued unchecked for 350 years. Early scientific estimates from the 1980s, after polar bears were protected for a decade or so, are in the neighborhood of 20,000 to 40,000 polar bears. Most researchers assume that the number of polar bears did increase due to the controls and quotas instituted by the 1973 treaty.

Today, researchers estimate that there are 20,000 to 25,000 polar bears in 19 relatively distinct sub-populations. Of those 19 sub-populations, eight are declining; three are stable; one is increasing and, for the remaining seven, there is insufficient data to determine. For comparison: In 2005, five populations were declining; two were stable and two were increasing. (There is insufficient data for the others.)

Currently, most of the populations are losing sea ice habitat which has negative impacts on their hunting, as a result most populations are experiencing declines in weight and health of bears, along with low reproductive and cub survival rates.

Since satellite records began in the late 1970s, about 50% of the ice area has within polar bear habitat has been lost, and the ice that remains has lost about 50% of its thickness. In 2012, the area of sea ice loss was greater than the entire area of the United States. That is a significant degradation of critical habitat for polar bears.

Because polar bears feed almost exclusively on seals they hunt on ice. Changes in the sea ice that affect access to prey has and will continue to have negative effects on the bears. In particular, if more snow falls, polar bears are less successful at breaking into the birth lairs of ringed seals. If too little snow falls, ringed seal pups are born on the sea ice without a lair and this makes them very vulnerable to predation by polar bears and arctic fox -- which can lead to a decline in seals. With less food, polar bears will fail to reproduce more often and give birth to smaller young that have higher mortality rates.

Unfortunately, polar bears are not "thriving" and their future doesn't look so bright.
Posted by David Stalling at 5:00 PM No comments: 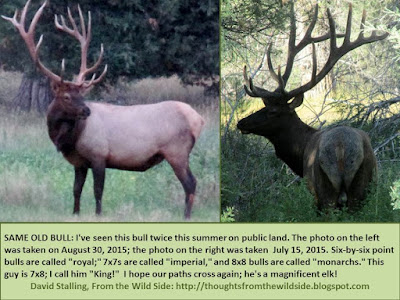 Posted by David Stalling at 7:46 AM No comments: