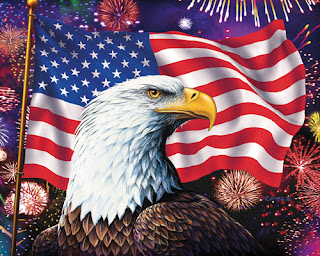 In the beautiful, wholesome midwestern American town of Lake Wobegon — that little town that time forgot and the decades cannot improve; where all the women are strong, all the men are good-looking, and all the children are above average — a young pregnant Christian woman was on her way home from church where she had been praying for the safety of her courageous husband, who is serving overseas as a U.S. Marine, risking his life and sacrificing so much for our great nation, flag and freedom. After helping an old WWII veteran across a busy street, she entered a small convenience store (where an American flag proudly hung out front) to purchase some food to offer to a homeless Vietnam veteran she had just seen outside and thanked for his service. While trying to find some whole milk and 100-percent Grade A American beef among all the strange 2-percent, tofu and organic yogurt, a group of Muslims and one Mexican immigrant with an MS-13 tattoo entered the store. After kneeling before the American flag they demanded that the store clerk increase his employee’s wages and bake a wedding cake for their gay friend. They then approached the woman and — in-between loud, disruptive, anti-Semitic chants of “Allahu Akbar” — they demanded she put on a hijab and obey Shariah law. The Mexican with the MS-13 tattoo tried to sell her meth and threatened to rape her if she didn’t buy some. About that time, a tall, lean man wearing cowboy boots and a cowboy hat entered the store. Fortunately, he had an open-carry permit and was brandishing an LMT CQB MRP Defender Model 16 5.56 rifle, rightfully practicing his God-given 2nd Amendment rights. After tipping his hat to the flag and removing a small stem of wheat from his mouth, he glared at the Muslims (and the Mexican with the MS-13 tattoo) with his cold, steel eyes and slowly and clearly said: “Boys, I’m afraid you Socialists done come to the wrong town. Now I strongly suggest ya’ll go back and help fix the totally broken and crime infested places from which you come from and mosey on out of here. Otherwise . . . Well, hell . . . Let’s just say a man’s gotta do what a man’s gotta do.” Needless to say, they scurried on out of there. But what if the free and the brave armed American hadn’t shown up? This is what’s happening to our great nation, folks. It’s time to wake up! If you’re outraged by this and you support this woman and her Marine husband and America and our flag and God and President Trump and the 2nd Amendment and freedom you will share this. If you don’t share this, you’re part of the problem!

Posted by David Stalling at 1:44 PM No comments: 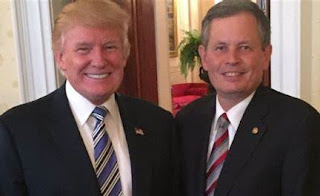 I’ve met Montana Senator Steve Daines a few times. I’m a constituent. Although I don’t agree with him on a lot of issues, he always seemed nice, professional and respectful. He was good to my son Cory, who has Duchenne Muscular Dystrophy.

Once, when Daines was still a Congressman, my son and I visited his office in Washington D.C. to persuade him to support the renewal of the Muscular Dystrophy Care Act. (He did, and even called Cory days later to personal tell him about it.) He took Cory out onto the House floor, let him cast a few votes, and introduced him to then-Representative (now Senator) Tammy Duckworth, a Democrat from Illinois, who, like my son, is also in a wheelchair. She lost both of her legs in Iraq while serving as a U.S. Army helicopter pilot. Born in Thailand, she was the first Thai-American woman and the first disabled woman to be elected to Congress. She’s liberal. She was born elsewhere. She’s American. She loves our country. She’s a patriot. She’s a wonderful part of American history. Daines seemed to respect her despite their political differences.

At one point, my son asked Daines about an issue Daines and I have disagreed on. Daines looked at me, looked at my son, smiled, and said, “Cory, there are things your father and I don’t see eye-to-eye on, and that’s okay. But we’re not here to talk about that. We’re here to talk about you and muscular dystrophy.”

It was a good answer. Daines earned my admiration and respect that day.

Monday, he lost my admiration and respect when he defended and joined Donald Trump’s insulting, race-based, xenophobic and divisive attacks on members of Congress, and his dangerous McCarthy-like judgements of who is and who isn’t “American.” The day before, Trump accused four progressive congresswomen of color of “hating America,” and suggested they “go back” to the “crime infested” countries they “originally came from” – even though all four are citizens of the United States, three were born in the United States, and all were elected by fellow U.S. citizens to serve in the U.S. House of Representatives.

In response, Daines tweeted: “Montanans are sick and tired of listening to anti-American, anti-Semite, radical Democrats trash our country and our ideals. This is America. We’re the greatest country in the world. I stand with @realdonaldtrump.”

I love the United States. I love the ideals of freedom, liberty and equality for all. Even if we haven’t always lived up to those ideals, our founders left us a Constitution that not only outlines those ideals but established legal and civil ways to fight for and achieve those ideals. To challenge things. To criticize things. To try and change things. Central to that is the freedom to speak against the things we don’t like.

That’s why I enlisted in the U.S. Marine Corps, volunteered to serve in a Force Recon unit, and took an oath to defend our nation and Constitution. That’s why after leaving active duty I served in the Marine Corps Reserves and then the Montana Army National Guard. I served with a diversity of people, from all walks of life, from a variety of backgrounds, from throughout the nation. Different colors; different religious views; different political views – a snapshot of Americans serving America. We often had debates and disagreements, occasionally heated ones, but we would have all sacrificed our lives for each other and our country. In fact, some of my friends did just that.

Last May, I attended a reunion of my fellow Force Recon Marines at topsail Beach, North Carolina, near Marine Corps base Camp LeJeune. I hadn’t seen most of them for more than 30 years. We remain different; maybe more so as we’ve aged. I don’t agree with the political views of most of them. But I love them like brothers. We’re all Americans. We all love our country. We’ve proven that. We take seriously the Voltairean notion (as expressed by Evelyn Beatrice Hall), “I disapprove of what you say, but I will defend to the death your right to say it.”

I find it increasingly and disturbingly disconcerting that so many Americans, and leaders such as Trump and Daines, don’t seem to understand the important distinction between patriotism and nationalism. They’ve hijacked and distorted the word ‘patriotism.’ They don’t seem to fully understand the First Amendment of the Constitution. They apparently believe that anyone who doesn’t share their thoughts, values and believes, and conform to their standards and notions of ‘patriotism,’ must hate America.

Ironically, their attitude is as anti-American as it gets.
Posted by David Stalling at 2:30 PM 11 comments: