Taking a Bullet For Conservation: An Estate of Hope (An Excerpt) 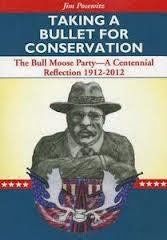 An excerpt from "Taking A Bullet For Conservation: The Bull Moose Party--A Centennial Reflection 1912-2012," by Jim Posewitz. (Published by Full Circle Press, 2011 and distributed by Riverbend Publishing.)


The day President McKinley died, Theodore Roosevelt was sworn in as president of the United States. He delivered his first message to Congress on December 3rd. Biographer Edmund Morris describes a portion of that speech:

“Then striking a note altogether new in presidential utterances, Roosevelt began to preach the conservation of natural resources. He showed an impressive mastery of the subject as he explained the need for federal protection of native flora and fauna. Urgently, he asked that the Bureau of Forestry be given total control over forest reserves, currently parceled among several agencies, and demanded more presidential power to hand further reserves over to the Department of Agriculture.” Roosevelt recognized that “. . . conservation of natural resources . . . had not yet dawned on the public mind.”

The effort to change those conservation perceptions in the public mind began with his first message to Congress and eventually included seven national conferences on the subject. A man of action as well as words, Roosevelt’s administration waded into securing a public land estate destined to be a protected estate for wildlife, fish, forests, open spaces, and those Americans who value nature and outdoor amenities. For those who appreciated those amenities, it became an estate of hope. Roosevelt described a philosophy that immediately became his method of operation.

“I declined to adopt the view that what was imperatively necessary for the Nation could not be done by the President unless he could find some specific authorization to do it. My belief was that it was not only his right but his duty to do anything that the needs of the Nation demanded unless such action was forbidden by the Constitution or by the laws.”

That philosophy, coupled with the 10-year old “Creative Act” now in the hands of one of its creators, enabled the president to get right to protecting forests, watersheds, wildlife, fisheries and other public resources. As president, from September 1901 to march of 1909, Roosevelt compiled the following record:

When the 7-1/2-year old presidential whirlwind subsided, 230 million actress had been set aside for conservation of natural resources and for Americans to enjoy. It was 359,375 square miles, roughly equivalent in size to the combined areas of Delaware, New York, Maine and Texas. It was just shy of 10 percent of America. When he finished, he told us why he did it:

“The things accomplished that have been enumerated above were of immediate consequence to the economic well-being of our people. In addition certain things were done of which the economic bearing was remote, but which bore directly upon our welfare, because they add to the beauty of living and therefore to the joy of life.”

It worked. When those words were written, America’s antelope population hovered around 5,000 now there are over a million. Wild turkeys had faded to about 100,000; they now number well past 4 million. White-tailed deer numbered about one-half million, and their population now is over 30 million. When Roosevelt was scouring remote western wild lands for elk, the nation had about 40,000; today, they too exceed 1 million and are back in Wisconsin, Pennsylvania, Kentucky, Tennessee, Michigan and Arkansas.

Midway through America’s Conservation Camelot, in 1904 Roosevelt had to stand for election to the presidency. The tension between Roosevelt and his own party that began in Albany simply escalated as Roosevelt’s meteoric career carried him into the White House. The nature of that relationship was well articulated by a New York Sun editorial before the 1904 Republican Party convention. The Sun, described by biographer Edward Morris as a “banner journal of business conservatism,” editorialized: “Roosevelt steps from the stage gracefully. He has ruled his party to a large extent against its will.” The Sun’s editorial then went on to single out Roosevelt’s conservation record writing:

“And, then, there is the great and statesmanlike movement for the conservation of our National resources, into which Roosevelt so energetically threw himself at a time when the nation as a whole knew not that we are ruining and bankrupting ourselves as fast as we can. . . This globe is the capital stock of the race . . . Our forests have been destroyed; they must be restored. These questions are not of this day only or of this generation. They belong all to the future.”

The editorial concluded with a rhetorical question: “What statesmen in all history had done anything calling for so wide a view and for a purpose more lofty?”

The wonder is that he accomplished it “against the will” of both his own party and also his partisan opponents. While Wall Street and special corporate interests struggled to find ways to resist Roosevelt’s 1904 nomination, he went on to win the election by the largest margin in American history up to that point. The people loved him and what he was doing for the country. Political party bosses and special interests would have to wait for a venue other than and open vote of the people to purge the reform-minded Theodore Roosevelt. . .

. . . The current political struggle over America’s natural resources continues with each new generation. In the 1912 election, the American conservation ethic was basically abandoned by the political party that once had a progressive component responsible for its birth. This political orphan, however, found a home 20-some years later when our nation was plagued by an economic depression and a drought-driven dust bowl in the “Dirty-Thirties.” In the depth of those desperately hard times, conservation was once again politically embraced by a Roosevelt. This time is was Democrat Franklin D. Roosevelt.

Conservation became part of the New Deal and the Soil Conservation Service and the Civilian Conservation Corps programs were among a new wave of conservation reforms. Another critically important aspect in the emergence of serious conservation in America was the creation and support of citizen-driven nongovernmental organizations. It was a necessity recognized early by the giants of conservation who were also battling from within the government. George Bird Grinnell formed the first Audubon Society in 1886. One year later, in 1887, he co-hosted the dinner with Theodore Roosevelt that became the genesis of the Boone and Crockett Club.

When the Taft administration was capitulating to the corporate resource raiders, the recently fired Gifford Pinchot gathered like-minded conservationists and formed the National Conservation Association. The mission of this later organization was “Figure out how to restore the world that Roosevelt had constructed.” In a democracy, a pattern of individual people taking action recurs.

When Franklin D. Roosevelt re-energized conservation within government in the 1930s, a similar resurgence of energy occurred in the nongovernmental sector. The National Wildlife Federation, Ducks Unlimited, The Wilderness Society, and others emerged in that difficult and dirty decade. It is how democracy works, and it may be the only way the wild things we value can be sustained from one generation to the next. We can take a lesson from this conservation heritage story: The necessity for all of us to participate in the public affairs within a democracy. It we take time to look, history teaches us the importance of being both politically critical and also personally active.

Fish, wildlife and the clean, wild places they need to survive, never had a vote. Those of us who value them have to do it for them.

Let’s observe the 100th anniversary of the Bull Moose Party, and the years that follow, with vigorous advocacy on behalf of America’s fish and wildlife resources. We can do it in honor of that original Bull Moose, Theodore Roosevelt, who challenged us to become the person:

“ . . . who at the best, knows in the end the triumph of high achievement, and who, at worst, if he fails, at least fails while daring greatly; so that his place shall never be with those cold and timid souls who know neither victory nor defeat.”

Retired from a 32-year career with the Montana Department of Fish, Wildlife & Parks, Jim Posewitz is the Founder and Executive Director of Orion: The Hunter's Institute; an Adjunct Professor of History and Philosophy at Montana State University; an avid and passionate hunter, angler and conservationist, and (in addition to "Taking a Bullet for Conservation") is the author of: "Beyond Fair Chase: The Ethic and Tradition of Hunting," "Inherit the Hunt: A Journey Into the Heart of American Hunting," and "Rifle in Hand: How Wild America was Saved."  He is also a long-time friend, mentor and inspiration to me and many others who strive to follow the tremendous example he sets to carry on our conservation legacy.


Posted by David Stalling at 7:06 PM No comments: