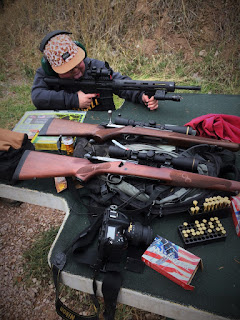 Yesterday was the first time I shot a semi-automatic, military-style rifle since I left the Montana Army National Guard 14 years ago. It reminded me just how deadly they can be in the wrong hands. Most anyone can rapidly become fairly proficient with them. My teenage son, who had never shot such a weapon before, put a deadly group of multiple shots into a paper plate from 25-yards in about ten seconds. He can't do that with my bolt-action hunting rifle. Neither can I. Nobody can.
The National Rifle Association (NRA) and its followers like to say things such as, "Guns don't kill people, people kill people." "You can kill people with a baseball bat as easy as a gun." That's true. But it's a hell of a lot easier to kill a lot of people quickly with the right choice of weapons. Nobody can go into a school and kill 22 kids in less than five minutes with a baseball bat. It's a lot easier to kill people when you have a weapon designed and made to efficiently kill lots of people in a short amount of time. This is why I was issued M16-A2 rifles, HK 9mm submachine guns, M60 machine guns, M203 grenade launchers and other potent, deadly weapons in the Marine Corps and National Guard -- not baseball bats. (See "Myths, Lies and Bullshit from the NRA.")

Some weapons are made for efficient, deadly assaults, hence the term "assault rifles." (There are those who resent that term, and claim its use shows a lack of knowledge about guns, and yet even some of the manufacturers and gun dealers who sell them call them "assault rifles.")
These weapons should be further restricted -- more extensive and thorough background checks along with registration, training and licensing requirements. And no, that would NOT violate our Second Amendment Rights. President Ronald Reagan and President George H.W. Bush didn't think so, and neither do I.
There have and always will be restrictions on Second Amendment rights. Even our "founding fathers" who crafted and approved of the amendment often fervently disagreed on it. Constitutional scholars, politicians, and others have had many rationale, reasonable, heated debates over it ever since. I am not allowed to have an M60 machine gun, an M203 grenade launcher, an M1 Abrams tank, a LAAW (Light Anti Tank Assault Weapon), Stinger anti-aircraft missile or a nuclear warhead. Those all seem like reasonable restrictions to me. We all draw the line somewhere.
Where does the NRA and its supporters draw the line? And why is it they think that wherever they chose to draw the line is what the rest of our nation should except --  and that any restrictions that cross their line is unconstitutional?

It is not unconstitutional for citizens to speak out and fight to make changes through the democratic process as outlined in our Constitution. To the contrary: It's very Constitutional. It's the American way. It's patriotic. What's actually unAmerican is for a special interest group to spread lies, myths and misconceptions and bully, threaten and intimidate our elected public officials and others to get their way -- effectively hijacking our democratic process, against the will of a majority Americans, preventing us from making our nation more safe. More sane.

There is no legitimate reason for citizens to own weapons designed and made to rapidly kill a lot of people in a short amount of time. The risks and dangers to our nation and innocent people far outweigh any benefit that can possible be gained. The NRA defends the rights of people to own pretty much any sort of weapon they desire -- not because of Second Amendment rights, but because they have become an arm of and public relations firm for a huge, powerful, wealthy and influential gun and weapons manufacturing industry. They have purchased our Congress to do its bidding through money, threats and intimidation. It's about profit, not the Constitution.

It's time for change.
Posted by David Stalling at 9:41 AM 16 comments: