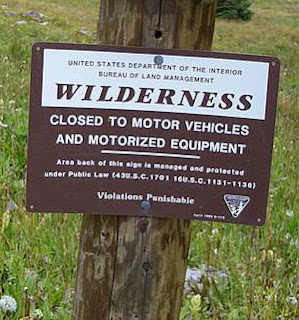 When Backcountry Hunters and Anglers (BHA) was founded, they took strong positions in defense of designated roadless lands and wilderness -- the places many of us refer to as, well . . . "the backcountry." Recently, the Montana Chapter of BHA responded to proposed legislation by Senator Steve Daines (R-Montana) to open Wilderness Study Areas to motorized use and development.
Fortunately, BHA is doing the right thing and opposing the actions. That's good. But why are they opposing it?
"We oppose top-down management," they say. Seriously, that's their stance; "We oppose top-down management."
The organization doesn't say it supports wilderness study areas and roadless lands. The organization doesn't say they support wilderness designation. The organization doesn't explain why wilderness and wilderness study areas are critical to many of the wild animals we like to hunt in wild places. They say they oppose "top-down management." (I'm assuming, and hoping, they do support top-down management when a president, says, gives national monument status to some special federal lands?)
Why the lame, weak political speak? I assume that, once again, they are afraid of confirming any talk about them being "greenies" and "environmentalists." They don't want to be perceived as "Green Decoys," as some industry-backed opponents of our public lands accuse them off. The word "Wilderness," (the big "W" word), should be avoided at all costs, I often heard during my many years working for hunting-conservation organizations. It may offend people. (One of BHA's employees publically ridicules us "tree-hugging," "enviros" "greenies" and assures people that he, and BHA, don't fit in with us green folks!)
So once again, instead of being bold leaders and speaking on the values of wilderness and wilderness study areas -- for healthy watersheds, for wild cutthroat and bull trout, for grizzlies and wolves and other wildlife, for hunting and fishing -- they worry about who they might offend and whether or not they'll be perceived as "green-weenie tree-huggers."
They're playing right into the hands of their opponents. They should stop worrying about appeasing those who will likely never support them and be the bold leaders they pretend to be -- be more like Theodore Roosevelt, Aldo Leopold and other past, bold leaders we love to quote. Help educate and inform hunters and anglers about the importance of wilderness; don't evade and avoid the topic. It's okay to be green!

Be green. Be proud. Be Bold. Be Leaders!

The green, proud, bold leaders at Trout Unlimited set a good example with their bumper sticker:

"Wilderness: A Great Place To Hunt and Fish."

Posted by David Stalling at 11:58 AM No comments: