GO GRIZ! A Return to the Gridiron with Coach to Cure 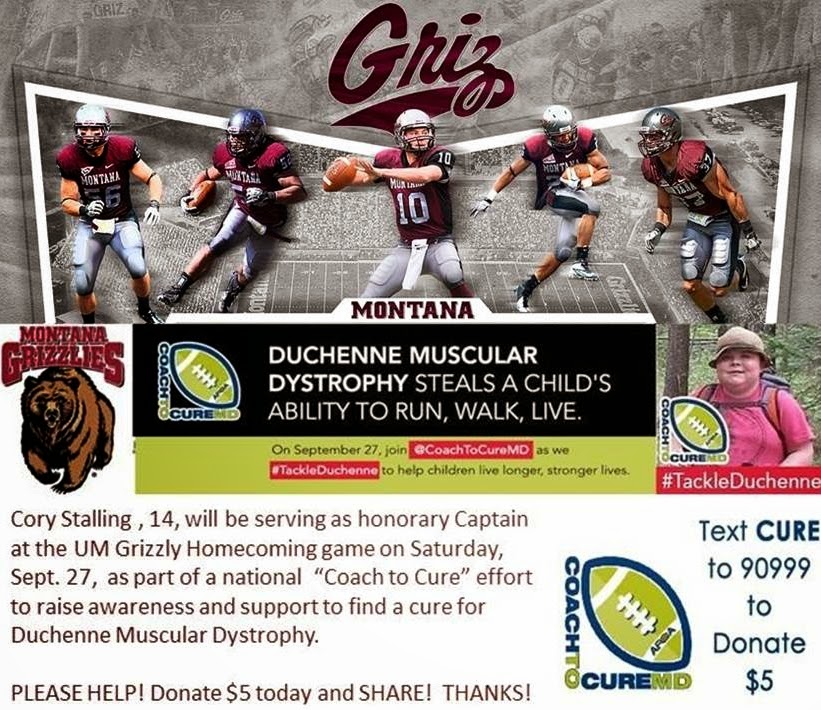 I suspect I am one of only a handful of Missoulians who have never uttered “Go Griz!” – at least not in reference to the football team.

Although I am an alumnus of the University of Montana, and have lived in Missoula (on and off) for nearly 30 years, I have never been to a Grizzly game. I loved playing football – I was a decent offensive guard and linebacker in high school, and played a season for a community college -- but have never been much of a spectator. Besides, football season coincides with elk season and I’ve long felt more at home in the wilds among real grizzlies.
The Griz are big in Missoula, particularly in the fall. It seems most every restaurant, bar and store in town has “Go GRIZ!” signs and merchandize. On game days half the town wears maroon and silver-colored shirts, sweatshirts, jackets, hats, socks, underwear and most anything else you might imagine adorned with the iconic grizzly bear or griz paw prints. When the griz win a home game, downtown can be insane with inebriated celebration; if they lose, downtown can be insane with inebriated drownings of sorrow.

Missoula can be obnoxiously Griz crazy.

Fortunately, not far from the outskirts of town, I often see real grizzly tracks and am occasionally lucky enough to get a glimpse of the Great Bear. I’ve always directed my “go griz” towards them.

When the gridiron Grizzlies won their first national championship in 1995 I had been in the backcountry for a week hunting. When I came out of the mountains I read a story about two grizzly bears that had been killed by hunters who mistook them for black bears. The next morning, when I arrived at the gym I worked out in, one of the other regulars greeted me and said,

I can be obnoxiously crazy about real grizzlies.

Today, Saturday, Sept. 27, I am going to my first Griz game. The homecoming game. The battle of the bruins! Montana Grizzlies vs Northern Colorado Bears. And I’ll be going onto the field. Not with helmet and shoulder pads, but with my 14-year-old son Cory.

Cory has Duchenne Muscular Dystrophy, a progressive, genetic, muscular-degenerative fatal disease for which there is currently no cure. There is, however, hope. Clinical trials are underway with promising results. But more awareness and money is urgently needed to turn hope into reality. That’s where the “Coach to Cure MD” effort comes into play.

With more than 600 college teams participating all over the nation, Coach to Cure MD is a one-day event sponsored by Parent Project Muscular Dystrophy and the American Football Coaches Association. The stated purpose is “to raise awareness of Duchenne muscular dystrophy, a devastating disorder that robs young men of their mobility, their independence, and sadly their life; Generate new financial support for Duchenne research through donations, grassroots fundraising, and text donations; and demonstrate college coaches’ commitment to the betterment of young men and the core academic research missions of their universities.” 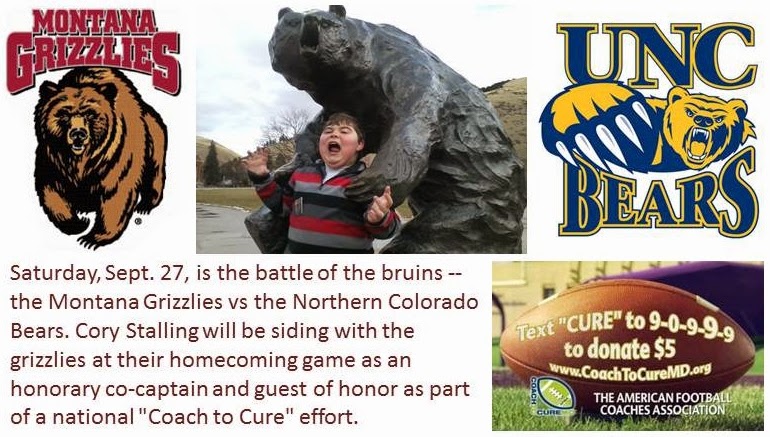 Cory will be the Grizzlies' honorary co-captain for the day and will be present at the coin toss. He’s pretty excited. I think I’m even more excited. And not just for Cory. It’s been a long time since I’ve stepped onto a football field. It’s already bringing back a lot of deeply buried memories. Good memories. I look forward to once agan hearing, seeing, smelling, feeling and experiencing the unique sounds, smells, adrenaline and excitement of a football game.

I won’t be doing any blocking or tackling, but I might just slap a few players on the ass.

Posted by David Stalling at 9:09 AM No comments: