Once again I attempted to have a rational, reasonable, respectful discussion with some others who claim to have been Recon Marines, on a Force Recon Association Facebook Page. Last time I did that the topic was gays in the military. Some of the so-called "Marines" on the site were bashing gays, expressing every homophobic insult you can think of. When I mentioned that I am gay, yet served honorably in 2nd Force Reconnaissance Company, several of them -- including a guy from Arizona named Paul Olenski -- accused me of being a "phony," not a "real Marine," a "fake." Seriously. Some people's brain-housing groups are so tiny they can't even comprehend that there are gay Marines. It seems beyond their mental capacity. They can't respond respectfully or intelligently, so they fall back on insults to boost their fragile egos and comfort their insecurities

The more recent topic was NFL players kneeling during the National Anthem. Some Marines expressed their understandable disapproval, stating that they think it's disrespectful to our nation and those who served our nation. I respectfully disagreed and stated my opinion on the matter: I don't think it's disrespectful to symbols of freedom to exercise freedom. Freedom is hardest to accept when people do things we may not like. Patriotism can't be forced upon others; there's a fine-line between patriotism and nationalism. Several so-called "Marines" berated me for my view, including (once again) Paul Olenski, who claims to have been a Recon Marine in Vietnam. He couldn't handle a rational, reasonable, respectful discussion so instead pitifully, childishly and humorously attempted to dig up "dirt" on me. He searched and found an old article about a time I was arrested for assault and posted it on the public forum in an apparent attempt to discredit and shame me. (It didn't work: I don't regret hurting a guy who robbed the store I was working at and threatened me and my family. Fortunately, all charges were dropped when the Judge witnessed the store's video tape and said my actions were in self-defense and justified.)  Paul Olenski didn't care about the facts; he just wanted to insult and attack me in anyway he could because I view a topic differently than he does. He apparently hates disagreement. He apparently hates freedom. He apparently hates our Constitution. He apparently hates what our nation stands for. While complaining about what he perceives as people being "disrespectful" to veterans, he insults and disrespects veterans.

(Interestingly enough, as an aside, a quick online search reveals that a Paul Olenski who fits his description and lives in his neck of the woods is on a sexual offender register. He's no Marine.)

Later, a Marine friend of mine posted a heartfelt story about a fellow Marine who lost his life saving his life. It so happens that Marine hero who save his life was gay and black, and had shared numerous stories with my friend about the hate, discrimination, racism and bigotry he had experienced throughout his life. My friend then related the story to the current protests by some NFL players regarding hate, discrimination, racism and bigotry, and concluded by saying all Marines should speak out and support their rights, freedom and liberties guaranteed by the Constitution we took an oath to defend.

The response? Several so-called "Marines," including (again) Paul Olenski, posted hateful, derogatory, bigoted comments about the gay, black Marine hero. Seriously. Some of them then defensively claimed to not be racist. (They're so ignorant and incapable of self-reflection that they don't even know they're racist.)

Sadly, people like Paul Olenski seem to dominate the Force Recon Association site. They bully others. The majority, who are good people, seem to remain quite -- and with people like Paul Olenski on there, I can understand why.  There are too many like him who can't comprehend diversity; who don't really understand the principles of liberty that are the bedrock of our nation and Constitution.

I served with some great men, and a lot of good, smart people have served in Force Recon. unfortunately some of them, like Paul Olenski, are ignorant, mean, racist, bigoted, miserable men who seem to hate diversity and freedom. They think because they served to protect freedom, they can dictate the values, beliefs and behaviors of others. Ironically, they work against the very nation and Constitution they profess to cherish.

Hardly what I would call Marines.
Posted by David Stalling at 6:21 PM No comments:

"Wake People Up!" (The Horrors of Nuclear War) 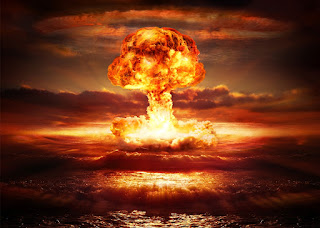 When John Hersey's story "Hiroshima" was first published in the New Yorker in 1946, one of the magazine's editors, William Shaw, said the importance of the piece was to "wake people up" to the reality and horrors of nuclear war.

Hersey, then a war correspondent, was one of the first Americans to see the devastation caused by the dropping of an atomic bomb on Hiroshima in 1945. His story (later published as a book) focused on six survivors, and describes in horrific, gruesome detail the aftermath of the bombing --including men, women and children with melted eyeballs, or vaporized, leaving only their shadows etched onto walls. The story provided Americans with a different view of the Japanese people than the demonizing propaganda generally portrayed in the media during war time. These were real people, not so different from us, most of them innocent of the atrocities committed by leaders they did not choose, victims of circumstances beyond their control. According to Hersey's account, most of them did not blame the United States, but rather blamed their own government.

The bombing of Hiroshima destroyed 5 square miles of the city. An estimated 180,000 people died. Another 100,000 died when another bomb was dropped on Nagasaki three days later. Thousands more suffered and died from cancer, birth defects, deformities and other tragic results of radiation poison.

"Their faces were wholly burned, their eyesockets were hollow, the fluid from their melted eyes had run down their cheeks.”

"The eyebrows of some were burned off and skin hung from their faces and hands. Others, because of pain, held their arms up as if carrying something in both hands. Some were vomiting as they walked. Many were naked or in shreds of clothing. On some undressed bodies, the burns had made patterns—of undershirt straps and suspenders and, on the skin of some women (since white repelled the heat from the bomb and dark clothes absorbed it and conducted it to the skin), the shapes of flowers they had had on their kimonos. Many, although injured themselves, supported relatives who were worse off. Almost all had their heads bowed, looked straight ahead, were silent, and showed no expression whatsoever."

"The scene inside was so terrible and so compelling that it had not occurred to him to ask any questions about what had happened beyond the windows and doors. Ceilings and partitions had fallen; plaster, dust, blood, and vomit were everywhere. Patients were dying by the hundreds, but there was nobody to carry away the corpses."

"They did not move and he realized that they were too weak to lift themselves. He reached down and took a woman by the hands, but her skin slipped off in huge, glovelike pieces. He was so sickened by this that he had to sit down for a moment.On the other side, at a higher spit, he lifted the slimy living bodies out and carried them up the slope away from the tide. He had to keep consciously repeating to himself, These are human beings."

“The crux of the matter is whether total war in its present form is justifiable, even when it serves a just purpose. Does it not have material and spiritual evil as its consequences which far exceed whatever good might result? When will our moralists give us an answer to this question?”

In regards to Hersey's story, Time magazine published this:

“Every American who has permitted himself to make jokes about atom bombs, or who has come to regard them as just one sensational phenomenon that can now be accepted as part of civilization, like the airplane and the gasoline engine, or who has allowed himself to speculate as to what we might do with them if we were forced into another war, ought to read Mr. Hersey."

Perhaps we all ought to read (or reread) Mr. Hersey. It's time, once again, to "wake people up."


Posted by David Stalling at 12:27 PM No comments: