A Slow Stroll Through Camp Town 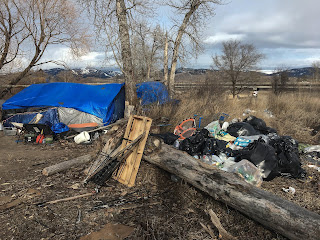 The walk across and under the Reserve Street bridge isn’t written up in any Missoula hiking guides, Chamber of Commerce pamphlets, Office of Tourism Brochures or in the flood of “Come Visit-and-Fly-Fish-Montana” magazine articles. If it were, there’d likely be a warning about the putrid stench of the Dailey’s rendering plant, where bacon is processed (“Premium Meats Since 1893”) and how, if the breeze is drifting towards you, as it was towards me that day (gusts of wind up to 100 miles-per-hour, and 60-degrees, in February, in western Montana!), it won’t take long before you feel nauseous. Or maybe it’s the sights under the bridge that made me nauseous. . . and queasy, and uneasy, and guilty, and a bit ashamed, and fortunate.

I walked on the sidewalk south across the bridge, away from the giant American Flag behind me, flying above the old Perkins restaurant (soon to be yet another brew pub), serving as a welcoming gateway of sorts to the homogenistic stretch of anywhere-in-America mega super stores -- Walmart, Home Depot, Lowe’s, CostCo, Best Buy, Target, Barnes and Noble -- built on the former ranchlands where I used to hunt.

Beyond the railing to my left, about 50 yards below, was the Clark Fork River, flowing rapidly underneath me and west from the direction of downtown. The tallest of the buildings -- the historic Wilma theatre, the First Interstate Bank, the recently-opened Residence Inn by Marriot where the Mercantile used to be -- are all visible in the distance from the bridge, as are the tall, snow-capped mountains above the University and framing Hellgate Canyon beyond. I was both surprised and concerned to see no ice. None. In February!

Just a dozen feet away, across the rusty railing to my right, between sidewalk and traffic, were hundreds of people sitting in a seemingly endless line of cars and trucks and SUVs, bumper to bumper, for as far as I could see, with nothing better to do as they crawled along, so it seemed, than watch me walk across a bridge. I felt a bit self-conscious, wondering – dressed as I was in dirty tan cargo pants, torn grey flannel shirt, old green wind parka and worn baseball-style cap adorned with the Marine Corps Eagle, Globe and Anchor -- if any or all of these people behind their steering wheels and in passenger seats wondered if I was one of them, a citizen of the camps below, and then I wondered if and why it would even matter what they wondered?

On the northeast side of the bridge, in a dead dull golden field of invasive knapweed, close to Dailey’s meats, is a large billboard with a photo of an inviting, modest-looking home for sale by Christies International Real Estate, “On Foothills Drive in Florence, $699,900.”  Across the street, on the southwest corner of Reserve and Mullan, a man wearing a black hoodie and red MAGA hat waved a bright red, white and blue banner: “TRUMP 2020, No More Bullshit.”

When I reached the south side of the bridge, I hopped over the metal railing to my left and, while carefully and clumsily walking and sliding down a steep, muddy hillside littered with garbage and shopping carts, down towards the little town of camps, I met two Missoula police officers who were on their way up. One of them, who introduced herself as Detective Brueckner, told me they had recovered a body from one of the tents earlier in the day. “He likely died in his sleep,” she said. “Apparently, he died a while ago.”

The bottom of the hill leveled out onto a flat, rocky floodplain, near a small grove of cottonwoods, about 100-yards or so from river’s edge, with mostly calf-high grasses and weeds in between, and round, fist-to-bowling-ball size rocks, exposed and polished by hundreds of years of spring flood currents, with an occasional dead or dying cottonwood here and there, some already fallen to the ground, where plastic shopping bags and other garbage and woody debris from previous flooding accumulated on the windward and upriver sides. Separated by maybe 50-300 yards, on either side of the bridge, were a series of small camps, close to a dozen, constructed of cheap tents, tarps, pallets and cardboard boxes. A small town of sorts, mostly out of sight and out of mind, with a fluctuating population of 10-20 people. On this day, on this particular walk, I only saw a handful of residents, but more may have been sleeping or resting in their shelters, or off doing their best to gather food, water or money. I saw a lot of blackened fire rings, built from river rock, and wondered if it was mostly a nocturnal town. I made a mental note to visit sometime after dark. Maybe.

I felt intrusive walking from camp to camp, skirting close to the edges, like an American tourist visiting a poverty-stricken third-world county, feeling fortunate for my own circumstances while pondering the plight of those who call this place home; Mental illness? Addiction? Bad choices? All of that and other things? It’s complicated, I know, but I couldn’t help but think about the mostly-celebrated groundbreaking currently underway a few miles upriver, near the heart of downtown, for yet another new $100 million hotel and events center being built by a millionaire who has been granted millions by the City Council in Tax Increment Funding because, well, it’s good for the economy.

Scattered everywhere were shopping carts and shopping bags from Target and Walmart and Albertsons; empty Pepsi and Coke cans; Nacho and Cheeto bags and an old, empty box of It’s It ice cream cakes. I saw a large, stuffed-animal black bear in a fire ring with its head ripped off, and a used syringe laying on the dirt nearby.  Somebody nailed a “Beware of Dog” sign on one of the cottonwoods, but I neither saw nor heard any canines to beware of. In one of the camps, I found two wet, moldy paperbacks sitting on a log: “How to Practice: The Way to a Meaningful Life,” by the Dali Lama, and “The Leader’s Handbook: A Guide to Inspiring Your People and Managing the Daily Workflow,” by Peter R. Scholtes. I stepped in a hole and took a fall, spooking some magpies from their nearby perch of dead cottonwood branches and noticed fresh deer tracks in the mud in front of me.

Years ago, before the camps started popping up in 2000, I sometimes came here in the spring to photograph bald eagles, during that time of year when the river rapidly rises, filling up with freshly melted snow from the Mountains of western Montana and rushing it west towards the Columbia and Pacific.  I remember once wading through frigid, knee-deep water where some of these camps now sit, seemingly high and dry and safe during most of the year. Last May the river rose right into the tents and carboard shelters, washing most everything, and even a few people, into the river. Local news reported that the folks living here “lost everything,” which might not seem like much, but was indeed everything to them.  People expressed understandable concern about the garbage washed away and floating towards Idaho. Every now and then I’ll read about bodies recovered from the river.

On the night of July 31, 2014, a fight broke out between three of the men living in these camps. One of the men, 38, was viciously beaten and shot to death, then dumped in the river. His body was found a week later, and several weeks after that they caught the killer, who was 28, down in Louisiana. He’s serving a 40-year sentence.

Word quickly spread that this place is dangerous. Or can be. I didn’t sense any danger while walking around there, not in the middle of a warm, windy February day. I imagine the incident serves as a metaphor of sorts to the danger residents of this camp may pose towards themselves – a danger of self-destruction, the danger of being caught in a devastating cultural, economic and social whirlpool, swirling and swirling ever downward, into the depths of mental illness and addiction and unpaid bills and stigmas and judgements and bad choices and circumstance and -- who knows what else?-- struggling to keep afloat, or perhaps giving up, or maybe enjoying the ride in an “I don’t give a shit” sort of way, all fed and fueled and powered by numerous complex factors I can’t and won’t pretend to fully understand. Many or most or maybe all of these factors, no doubt, are out of their control, though I was recently called a “dumb liberal piece of shit” for thinking so. I will say this: I’ve ventured to the precipice of that vortex. If not for a remarkable, loving ex-wife and a wonderful, caring physician at the Veteran’s Administration I’m not sure how far down I’d have fallen. I know I wouldn’t be walking around these camps as an outsider with the luxury of contemplating such things.

A guy named Joseph approached me from one of the camps, a good-looking  young man, perhaps 30, wearing a yellow North Face hoodie, blue jeans and gray tennis shoes. He asked me what I was up to, requested I not take photos of any people living there, and told me that his friend, a seemingly shy quieter man standing nearby, said I looked just like his pastor. “Same build, same walk, same look,” he said.

“He must be a handsome pastor,” I replied.

I assured him I respected others enough to not take photos of them without permission, and was just checking things out, and would likely write about my visit. He didn’t seem to mind. In fact, he gave me his phone number and asked me to give him a call if I wanted to chat more. He was a life-long Montanan, he said, who “fell on hard times.” He recently moved to these camps from another along the Yellowstone River near Bozeman (“now THAT crazy river floods!” he said), and he hoped to help organize this camp a bit better, clean it up, make it more acceptable and livable.

“I’m a religious man,” he said. “I believe in the Ten Commandments. Do unto others. Thou shall not steal. Thou shall not kill. All of that. Unfortunately, not everyone lives by that, but we all need to.”

I looked above, atop the massive concrete structure nearby, where lines of congested traffic slowly moved north, and south, to and from the big box stores, the economic heartbeat of America, beating faster and faster and faster.

Posted by David Stalling at 3:31 PM